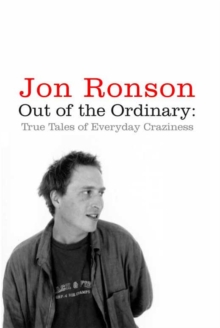 Out of the ordinary : true tales of everyday craziness

A collection of Jon's "Guardian" features, reworked and with new material, with a common theme: the ways in which people get themselves into wholly irrational bubbles, within which all manner of lunacy makes perfect sense.

In Jon's previous two books, "Them" and "The Men Who Stare at Goats", the nuttiness took place a long way from everyday life - on US military bases, or at Jihad training camps, or during conclaves of powerful men gathered for an annual ritual in a redwood forest.

In "Out of the Ordinary", the nuttiness is much closer to home - it's mainstream, domestic, ordinary insanity.

The book consists of three parts. In part one, Jon will rework four pieces. The first is about his parents commissioning a local artist to paint a Ronson family portrait.

The second is about Jon taking his son, Joel, to Lapland, to meet Santa.

The third is about Jon doing the Alpha course and nearly finding God.

The fourth piece will be a major reworking of his "Out of the Ordinary" weekly column in the form of a diary.Part two consists of two long pieces about courtroom dramas: the Who Wants to be a Millionaire coughing major trial, and the trial of Jonathan King on charges of sexually molesting under-age boys. And part three will be about nuttiness in the world of celebrity.

Out of the Ordinary will be Jon Ronson at his inimitable best: hilarious, thought-provoking and with an unerring eye for human frailty.