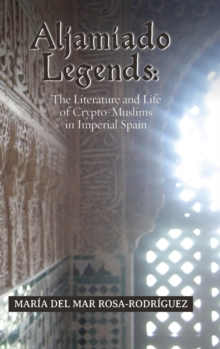 Aljamiado Legends : The Literature and Life of Crypto-Muslims in Imperial Spain: A Critical Commentary on Religious Hybridity and English Translation

This is the first collection of Aljamiado literature translated into the English language. Aljamiado texts are written in the Spanish language using the Arabic alphabet; the texts look like Arabic, but sound like Spanish when read aloud. The Aljamiado legends included in this volume tell the story of a crypto-Muslim community in Spain that managed to preserve its religion and culture in the 16th-Century Spanish-Catholic state. The anonymous authors of these legends intended to preserve their stories, folktales, and religious teachings through a secretive language that only the Muslims of Spain could decipher and understand.

The English translation of these texts gives scholars today a glimpse into the secret lives of Muslims in 16th-century Spain. The legends in this collection shed light on the crypto-Muslim’s religiosity, identity, and their own sense of self-definition.

The selected legends are grouped into four thematic areas: “Legends of Conversion and the Afterlife,” “Secular Tales of Love, Adventure and Morality,” “Legends of War, Victory and Glory,” and “Legends of the Prophet Muhammad, Jesus and Other Religious Figures.”