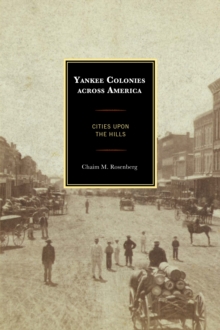 Yankee colonies across America : cities upon the hills

The arrival in 1620 of the Mayflower and Puritan migration occupy the first pages of the history of colonial America.

Less known is the exodus from New England, a century and a half later, of their Yankee descendants.

Yankees engaged in whaling and the China Trade, and settled in Canada, the American South, and Hawaii.

Between 1786 and 1850, some 800,000 Yankees left their exhausted New England farms and villages for New York State, the Northwest Territory and all the way to the West Coast.

With missionary zeal the Yankees planted their institutions, culture and values deep into the rich soil of the Western frontier.

New England was the hotbed of reform movements. Yankee-inspired religious movements spread across the nation and beyond.

The Anti-Slavery and the Anti-Imperialism movements started in New England.

Susan B. Anthony campaigned for women's suffrage, Clara Barton founded the American Red Cross, Dorothea Dix established asylums for the mentally ill, and May Lyon was a pioneer in women's education.

Yankees spread the Industrial Revolution across America, using waterpower and then stream power.

Opposing slavery and advocating education for all children, the Yankee pioneers clashed with Southerners moving north.

In Kansas the dispute between Yankee and Southerner erupted into armed conflict.

In time the Yankee enclaves in Detroit, Chicago, Cleveland, Minneapolis, and San Francisco fused with others to form the White Anglo-Saxon Protestant elite (WASPs), to dominate American commerce, industry, academia and politics.

By the close of the nineteenth century, industry began to leave New England.

Yankees felt threatened by the rising political power of immigrants.

In an effort to keep the nation predominantly white and Protestant, prominent Yankees sought to restrict immigration from Asia, and from eastern and southern Europe, and impose quotas on American-Catholics and Jews seeking admission to elite universities and clubs.

Despite barriers, the American-born children of the immigrants benefited from their education in public schools and colleges, entered the American mainstream, and steadily eroded the authority of the Protestant elite.

The Immigration and Nationality Act of 1965 opened the United States to immigrants from Asia, Africa and South America.

The great mix of races, religions, ethnicity and individual styles is forming a pluralistic America with equally shared rights and opportunities.