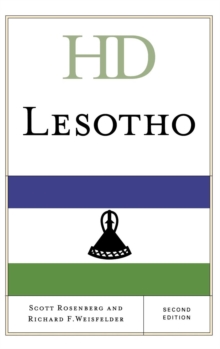 Part of the Historical Dictionaries of Africa series

Lesotho is rather different from most other African countries.

For starters, it is a kingdom, which preserves a traditional hierarchy and customs, and its population consists of one fairly homogenous ethnic group, although admittedly there are differences and occasional rifts within it.

Then, it is a landlocked country, completely surrounded by South Africa on which is depends heavily.

Economically, it has not been doing particularly well, this partly because the country is so poorly endowed by nature, and its people often eke out a living abroad.

Politically, there have been ups and downs, the downs fortunately lying in the past, with Lesotho doing somewhat better since the latest elections.

Socially and culturally, as hinted, it is quite unique and this can be gathered from reading the book. This second edition of Historical Dictionary of Lesotho covers the full scope of Lesotho's ancient, colonial, and independence eras.

It gives greater emphasis to the more recent period and brings the book fully up-to-date.

This is done through a chronology, an introductory essay, appendixes, and an extensive bibliography.

The dictionary section has over 400 cross-referenced entries on civil society, key events, leaders, governmental, international, religious, and other private organizations, policies, political movements and parties, economic elements, and many other areas that have shaped the country's trajectory.

This book is an excellent access point for students, researchers, and anyone wanting to know more about Lesotho.