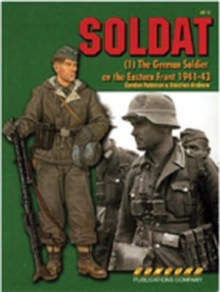 The German Army was flushed with success after the swift and overwhelming victories in Poland, Norway, the Low Countries, France and the Balkans.

However, Germany and its leader bit off more than they could chew as they assaulted the massive land of Russia with its unbounded human resources, while attempting to simultaneously fight on North African and Western Europe fronts.

There is a focus on the uniforms, equipment, weapons and vehicles of the German armed forces, plus an introductory text giving some pertinent details.

This first volume is confined to the period 1941-1943. The atmospheric black and white photos have been carefully selected to provide maximum detail and enjoyment for readers.

They show soldiers and officers in all kinds of scenarios and phases of combat, and accurately portray the rigors of the campaign on the Eastern Front, as the operation moved from the initial successes to ultimately become bogged down outside Moscow in the bitter winter conditions of the Russian interior.

The photos are explained by informative and insightful captions.

In addition there are four color plates that give accurate details about how uniforms and personal equipment were worn.

These feature typical German soldiers in both winter and summer gear. All in all, this volume gives an interesting and informative portrayal of the German soldier as he invaded Russia and fought his way across the steppes and through the hot summers and harsh winters.