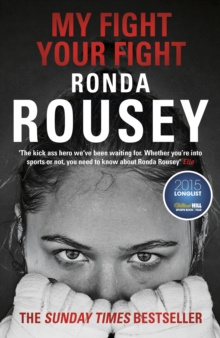 My fight your fight

*WINNER British Sports Book Awards SPORTS BOOK OF THE YEAR*'I have this one term for the kind of woman my mother raised me not to be, and I call it a 'Do-Nothing B-tch'.

It's the kind of chick that just tries to be pretty and be taken care of by somebody else.

That's why I think it's hilarious when people say that my body looks masculine or something.

Just because my body was developed for a purpose other than f-cking millionaires, doesn't mean it's masculine.

I think it's femininely badass as f-ck because there isn't a single muscle on my body that doesn't have a purpose because I'm not a 'Do-Nothing B-tch.'When Ronda Rousey made this speech she inspired women everywhere.

Beyonce even played a recording on-stage and it went viral.

But Rousey has been inspiring others her whole career. The journey to the top for the most dominant mixed-martial-arts fighter in history has been filled with challenges.

From a childhood marked by speech problems to the painful loss of her father, she grew up repeatedly pushing her mind and body to the limit in order to win.

She battled prejudice to become the first female fighter in UFC.

Now she is the biggest name in the sport, breaking attendance levels and re-writing the history books with her astonishing knockout victories, most in under a minute.

She has also forged a successful Hollywood career as an actor.

In this honest and inspiring book, Rousey relives her greatest fights and shares her secrets for success and mental toughness.

She reveals how we can all be at our best, even on our worst days, and how we can turn our limitations into opportunities.

It will leave you ready to face your own challenges in life, whatever they may be.