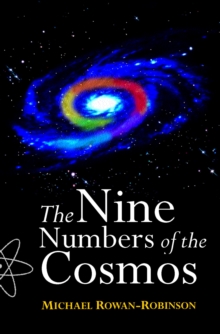 The nine numbers of the cosmos

How old is the universe? How far away are the galaxies and how fast are they travelling away from us?

What is dark matter and why do astronomers think it pervades the universe?

How heavy is the vacuum? How do galaxies form?Michael Rowan-Robinson answers these and many more questions in a highly original and intriguing way.

He encapsulates our current knowledge (both what we do and don't know) of the origin and the nature of the universe into nine numbers.

These cosmic numbers appear to be independent characteristics of our universe and include its age, the Hubble constant (a measure of its rate of expression), and the density of matter in the universe.

Only one of the nine numbers is known with real precision,and four of them only poorly known.

The complex ideas that underpin modern cosmology such as the origin of the elements and quantum theory are explained clearly and accessibly, and more speculative ideas like inflation and superstrings are also covered, but with a refreshing scepticism.

While mostof what we know has been learnt during the 20th century, Rowan-Robinson provides a historical perspective, paying homage to the achievements of the Greeks, Renaissance astronomers, and the age of Newton.

He ends the book with a look to the future, predicting that with the further space missions we will accurately know the nine numbers described in this book by the year 2015, but concludes that the origin of the Big Bang itself will still be a mystery by the end of the twenty-first century, andperhaps even in the year 3000.