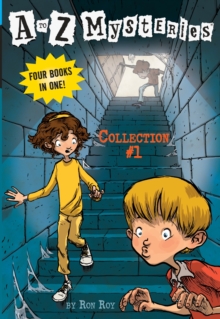 A to Z Mysteries: Collection #1

Part of the A to Z mysteries series

A is for AUTHOR . . .
Dink writes to his favorite author, mystery writer Wallis Wallace, and invites him to visit Green Lawn. Wonder of wonders, Wallace says yes! In fact, the famous writer says that the only way he won't come is if he's kidnapped. But when the big day comes, Wallis Wallace is nowhere to be found. The police think he just missed his plane, but Dink knows better. It's up to Dink and his two best friends, Josh and Ruth Rose, to find Wallacebefore it's too late!

B is for BANDIT . . .
A bandit has robbed the Green Lawn Savings Bank! Dink and his friends Josh and Ruth Rose are ready to help. When a private detective comes to Dink's door looking for the kid who videotaped the crime, the trio volunteers to find him. After all, there's a reward! But tracking down one red-headed kid isn't such an easy job, especially if he doesn't want to be found. Dink and his friends must find that kidand his tapebefore the bandit does!

C is for CANARY . . .
Dink, Josh, and Ruth Rose get an urgent call from Mrs. David. Her canary is gone! And that's not all. Three other pets have mysteriously disappearedincluding Ruth Rose's cat, Tiger! The kids are sure a pet-napper is to blame. They won't stop until they've tracked down the thief and returned the stolen pets to their rightful owners!

D is for DUNGEON . . .
Dink, Josh, and Ruth Rose are having a sleepoverin a castle! Dink's favorite mystery writer, Wallis Wallace, has invited them for a visit. But as soon as they arrive, the kids start hearing screams behind the walls. Wallis Wallace says not to worry, every castle is haunted, but Dink isn't so sure. Can they discover whoor whatis haunting Moose Manor?