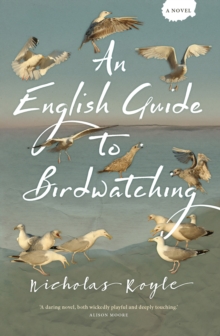 An English guide to birdwatching

Silas and Ethel Woodlock have retired from the business of undertaking to spend their twilight years by the sea but things are not as easy as they'd hoped, and it's all to do with herring gulls.

Stephen Osmer and Lily Lynch are a glamorous young couple on the London literary scene.

While Lily pursues an ambitious public art project about 'cinematic intentions', we encounter Osmer's brilliance as an arts journalist, writing a dangerously provocative essay about social justice and the banking crisis, as well as a diatribe about two people called Nicholas Royle, one a novelist, the other a literary critic.Did Royle, the literary critic, steal and publish a manuscript written by Silas Woodlock on the subject of 'Gulls'?

With whom is Lily Lynch having a passionate affair? A midsummer party at a farmhouse by the sea provides the fateful climax.Playfully commenting on this main story are 17 interlinked 'Hides', primarily about birds, bird photography and films (including Hitchcock's), ornithology and bird mythology.Like the birdwatcher's hut, these 'hides' afford a new outlook as well as a commentary on the themes that fly out of, or nestle within the novel: possession and betrayal, identity and mortality, and the dangers unleashed by desire and ambition. At once comic and profound, this mischievous, inventive, word-juggling novel brims with joy at the transformative possibilities of language, but also shows extraordinary sensitivity to the messy business of being human and the fragility of the physical world we inhabit.