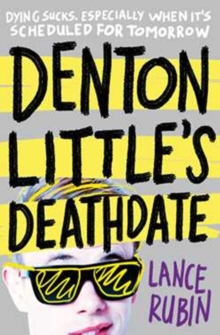 For Denton, that's in just two days - the day of his senior prom.

Despite his early deathdate, Denton has always wanted to live a normal life - but his final days are filled with dramatic firsts.

First hangover. First sex. First love triangle (the first sex seems to have happened not with his adoring girlfriend, but with his best friend's sister.

Though he's not totallysure - see, first hangover). His anxiety builds when he discovers a mysterious purple rash making its way up his body.

Is this what will kill him? Then a strange man shows up at his funeral, claiming to have known Denton's long-deceased mother, and giving him a confusing warning... Suddenly Denton's life is filled with mysterious questions and precious little time to find the answers.

Lance Rubin takes us on a fast, gripping, and outrageously funny ride through the last hours of a teenager's life as he searches for love, meaning and (just maybe) a way to live on . . .