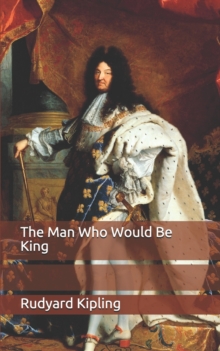 The Law, as quoted, lays down a fair conduct of life, and one not easy to follow.

I have been fellowto a beggar again and again under circumstances which prevented either of us finding out whetherthe other was worthy.

I have still to be brother to a Prince, though I once came near to kinship withwhat might have been a veritable King and was promised the reversion of a Kingdom - army, lawcourts, revenue and policy all complete.

But, to-day, I greatly fear that my King is dead, and if I wanta crown I must go and hunt it for myself.The beginning of everything was in a railway train upon the road to Mhow from Ajmir.

There hadbeen a deficit in the Budget, which necessitated travelling, not Second-class, which is only half asdear as First-class, but by Intermediate, which is very awful indeed.

There are no cushions in theIntermediate class, and the population are either Intermediate, which is Eurasian, or native, whichfor a long night journey is nasty; or Loafer, which is amusing though intoxicated.

Intermediates donot patronize refreshment-rooms. They carry their food in bundles and pots, and buy sweets fromthe native sweetmeat-sellers, and drink the roadside water.

That is why in the hot weatherIntermediates are taken out of the carriages dead, and in all weathers are most properly looked downupon.My particular Intermediate happened to be empty till I reached Nasirabad, when a huge gentlemanin shirt-sleeves entered, and, following the custom of Intermediates, passed the time of day.

He wasa wanderer and a vagabond like myself, but with an educated taste for whiskey.

He told tales ofthings he had seen and done, of out-of-the-way corners of the Empire into which he had penetrated,and of adventures in which he risked his life for a few days' food. "If India was filled with men likeyou and me, not knowing more than the crows where they'd get their next day's rations, it isn'tseventy millions of revenue the land would be paying - it's seven hundred million," said he; and asI looked at his mouth and chin I was disposed to agree with him.

We talked politics - the politicsof Loaferdom that sees things from the underside where the lath and plaster is not smoothed off -and we talked postal arrangements because my friend wanted to send a telegram back from the nextstation to Ajmir, which is the turning-off place from the Bombay to the Mhow line as you travelwestward.

My friend had no money beyond eight annas which he wanted for dinner, and I had nomoney at all, owing to the hitch in the Budget before mentioned.

Further, I was going into awilderness where, though I should resume touch with the Treasury, there were no telegraph offices.I was, therefore, unable to help him in any way.