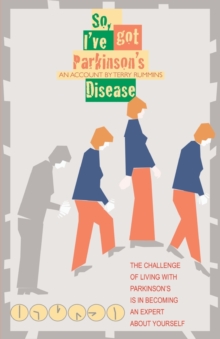 So, I've got Parkinson's disease

Terry Rummins was diagnosed with Parkinson's 10 years ago.

So, I've Got Parkinson's Disease is her story and covers her diagnosis and the progression of the condition - from the first warning tremors in her right hand to her day-to-day life now. When Terry was first diagnosed she didn't know what to expect, veering wildly between visualising herself in a wheelchair within a few months and not really believing that there was anything wrong with her.

Parkinson's is a paradoxical disorder. 'On' and 'Off' are terms used to describe the regular and debilitating changes the Parkinson's person can experience as a result of the interaction between symptoms and medication: from feeling well to the feeling of having aged twenty years in as many minutes.

Terry stresses the importance of learning which symptoms are a result of the Parkinson's itself, which are the results of taking particular drugs and which are as a result of environmental factors such as stress and diet.

Terry has written this book in the hope that describing her experience will benefit others who have been diagnosed with Parkinson's and to help them understand their expectations of how the condition may affect them.

This is a candid story, told with humour and contains a positive message for those recently diagnosed and those close to them.

It is also for anyone interested in what happens when life presents an unpleasant surprise.