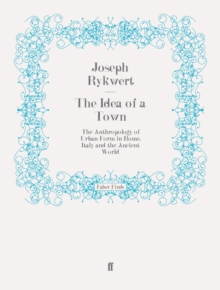 The idea of a town: the anthropology of urban form in Rome, Italy and the ancient world

Part of the Faber finds series

Faber and Faber
0571308767 / 9780571308767
eBook (EPUB)
301.360937
04/07/2013
Available
English
315 pages
Copy: 10%; print: 10%
Roman towns and their history are generally regarded as being the preserve of the archaeologist or the economic historian. In this famous, unusual and radical book which touches on such disparate themes as psychology and urban architecture, Joseph Rykwert has considered them as works of art. His starting point is the mythical, historical and ritual texts in which their foundation is recounted rather than the excavated remains, such texts having parallels not merely in ancient Greece but also further afield Mesopotamia, India and China. To achieve his reading of the Roman town, he has invoked the comparative method of the anthropologists, and he examines first of all the 'Etruscan rite', a group of ceremonies by which all, or practically all, Roman towns were founded. The basic institutions of the town, its walls and gates, its central shrines and its forum are all of them part of a pattern to which the rituals and the myths that accompanied them provide clues. Like in other 'closed' societies, these rituals and myths served to create a secure home for the citizen of Rome and to make him feel part of his city and place it firmly in a knowable universe. 'It is refreshing to look at standard themes of the history of urban design from a nonrational point of view, to see surveyors as quasi priests and orthogonal planning as a sophisticated technique touched by divine mystery . . .. Rykwert's lasting worth will be to wrench us away from rationalist simplicities, and to make us face the fundamental disquietof the human spirit in its claim to a permanent place on the land.' Spiro Kostoff,Journal of the Society Architectural Historians