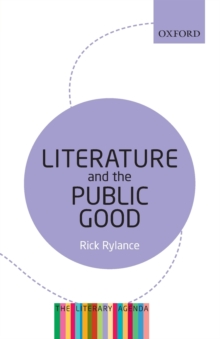 Literature and the public good

By: Rylance, Rick (Institute for English Studies in the School of Advanced Study at the University of London)

Part of the The literary agenda series

The Literary Agenda is a series of short polemical monographs about the importance of literature and of reading in the wider world and about the state of literary education inside schools and universities.

The category of 'the literary' has always been contentious.

What is clear, however, is how increasingly it is dismissed or is unrecognised as a way of thinking or an arena for thought.

It is sceptically challenged from within, for example, by the sometimes rivalclaims of cultural history, contextualized explanation, or media studies.

It is shaken from without by even greater pressures: by economic exigency and the severe social attitudes that can follow from it; by technological change that may leave the traditional forms of serious human communicationlooking merely antiquated.

For just these reasons this is the right time for renewal, to start reinvigorated work into the meaning and value of literary reading. Rick Rylance addresses the debate over the public value of literary studies in a book which starts from the widely-remarked predicament of the humanities in modern times.

By comparison with science, technology, engineering, and mathematics, the humanities can be negatively characterised as at best optional extras; at worst, frivolous and wasteful.

Funders and policy-makers can question their value in terms of utility, vocational prospects and intrinsic worth, while journalists and commentatorspredict extinction. So what is the justification for literature at the present time?

Rylance argues that literature's value lies in its enormous public presence and its contribution to the public good.

Far from being apologetic for our investment in literature, he argues for its value to all parts of our society from economic productivity to personal and social wellbeing.

He examines discussion of literature's public role over time, taking in key moments of self-reflection such as Sir Philip Sidney's 'Defense ofPoesy' (1581) and work by John Mill and Ruskin.

He reviews current arguments about how culture creates value: from the idea of 'public goods' in economics to the value of reading for social consciousness in cognitive psychology.

The book makes strong claims for the importance and urgency of readingliterature today.