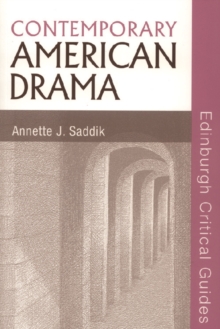 By: Saddik, Annette J.,  Halliwell, Martin(Edited by),  Mousley, Andy(Edited by)

Part of the Edinburgh Critical Guides to Literature series

This book explores the development of contemporary theatre in the United States in its historical, political and theoretical dimensions.

Saddik traces the development of contemporary drama since 1945, and discusses the cross-cultural impact of postwar British and European innovations on American theatre from the 1950s to the present day in order to examine the performance of American identity.

She argues that contemporary American theatre is primarily a postmodern drama of inclusion and diversity that destabilizes the notion of fixed identity and questions the nature of reality. Key features * Examines the influence of international figures such as Aristotle, Brecht, Artaud and Boal who are central to theatre as a discipline * Explores realistic and anti-realistic styles of American drama and their political and social implications, along with key critical terms and movements * Places the complexity of contemporary American drama within its political, sexual and ethnic contexts * Includes rare images from La MaMa Archive/Ellen Stewart Private Collection * Discusses in detail Stairs to the Roof and Camino Real by Tennessee Williams, Death of a Salesman and The Crucible by Arthur Miller, Dutchman and The Slave by Amira Baraka, Funnyhouse of a Negro by Adrienne Kennedy, The Tooth of Crime and True West by Sam Shepherd and American Buffalo by David Mamet as well as a range of other texts and performers.