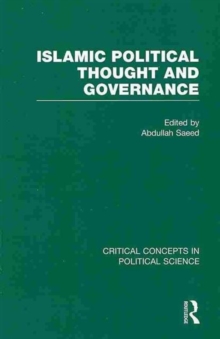 Part of the Critical Concepts in Political Science series

Islam has had a significant impact on world history, not only as a major religion that has directed the personal beliefs and actions of individuals, but also as the basis of a distinct system of government that has developed its own institutions, practices and philosophies. This new Routledge Major Work collection is concerned with the development of political thought in Islam.

By political thought is meant, broadly, the study and interpretation of Islamic political culture, ideas, beliefs, and institutions; the contribution of key political theorists and authorities to the understanding or practice of governance; what people and groups believed about political authority and institutions and their political convictions; and how politics in the Islamic world has related to and interacted with other disciplines, such as religion, law, ethics, and philosophy. Although contemporary issues in Islamic political thought are very much in the public focus at the moment, this set also focuses on the history and development of Islamic political theories and thought, from their inception until the twentieth century.

Political thought in Islam did not develop in isolation-it responded to and interacted with the political institutions and theories of other civilizations throughout history.