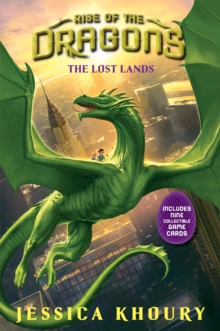 Part of the Rise of the Dragons series

With 9 collectible game cards that put YOU inside the dragon battle! There was a time when our world was full of dragons, and they lived alongside humans in harmony.

But after a rogue group called the Raptors tried to gain power and rule over Earth, all dragons were banished to another realm. Years passed, and then decades, and then centuries. And most humans forgot about the dragons. It was almost as if they had never existed. But some still new the truth, and the legend stayed alive. Eleven-year-old Sirin grew up with the stories, but the magic of those tales seemed hard to believe.

That is, until Sirin saw a mysterious streak of silver in the night sky and decided to find its source. Sirin, Allie, and Joss have joined forces with the legendary silver dragon Lysander, the only creature capable of opening portals between the two worlds.

But the powerful Lennix clan is following the children's every move and will stop at nothing to capture Lysander.

After generations of plotting, the Lennixes - and their bloodthirsty dragon allies, the Raptors - are terrifyingly close to establishing a brutal dragon regime on Earth, just like they did centuries ago.

Now, it's up to Allie, Joss, and Sirin to protect Lysander while searching for a secret source of lost dragon magic, the only force powerful enough to stop the Raptor.

But when their search takes them to one of the largest cities on Earth, the new friends must decide what's more important: finding the missing treasure or guarding the most important secret in the world -- that dragons have returned to Earth... and not all of them have good intentions.