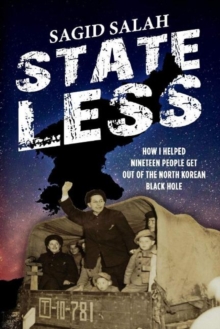 Stateless : How I Helped Nineteen People Get Out of the North Korean Black Hole

Sagid Salah was born in Seoul, Korea. His parents migrated to Seoul after fleeing the Soviet Union during the Russian Revolution.

Their family resided there until the outbreak of the Korean War, when they were captured by North Korean forces and held in various prison camps together with American and other foreign prisoners, both civilian and military, for almost four years.Sagid's story describes the harsh conditions their prisoner group was subjected to during their forty-three months of captivity, which many in their group did not survive.

They witnessed shootings and torture and were subjected to starvation diets and cruel treatment by the North Korean guards, most notably one major who became known as "The Tiger", and sent the group on a 120 mile Death March for nine days through snow and freezing temperatures, with some prisoners weak and sick, and some having only summer clothes and no shoes.

At the same time, they made some lifelong friends. Sagid and his five younger siblings were taught languages, writing, electronics and various subject matters and trades by the other internees.

Those who made it out, the "Tiger Survivors" continued to gather and have reunions for many years after their return.

At the end of the war, the surviving prisoners were returned to their home countries.

Nineteen prisoners remained, who were refugees from the Russian Revolution, and therefore stateless with no home countries to request their return and what appeared to be no hope of getting out of North Korea.

At that time, Sagid made a secret deal to get them all back to South Korea.

He kept his secret for 65 years, and in his mid-80s decided to write this book and reveal his story.