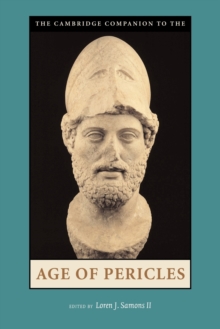 The Cambridge companion to the Age of Pericles

Part of the Cambridge Companions to the Ancient World series

Mid-fifth-century Athens saw the development of the Athenian empire, the radicalization of Athenian democracy through the empowerment of poorer citizens, the adornment of the city through a massive and expensive building program, the classical age of Athenian tragedy, the assembly of intellectuals offering novel approaches to philosophical and scientific issues, and the end of the Spartan-Athenian alliance against Persia and the beginning of open hostilities between the two greatest powers of ancient Greece.

The Athenian statesman Pericles both fostered and supported many of these developments.

Although it is no longer fashionable to view Periclean Athens as a social or cultural paradigm, study of the history, society, art, and literature of mid-fifth-century Athens remains central to any understanding of Greek history.

This collection of essays reveal the political, religious, economic, social, artistic, literary, intellectual, and military infrastructure that made the Age of Pericles possible.