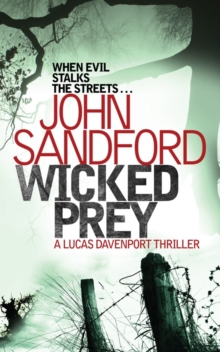 Part of the A Lucas Davenport thriller series

A Lucas Davenport thriller by internationally bestselling novelist John Sandford Having spent the past two years in hiding following a daring and successful heist, a big-time robber is back in Minneapolis chasing the opportunity for an even greater steal.

The big Republican party convention is in a couple of weeks: thousands of people spending cash, which is flowing into a relatively inadequate Brinks warehouse, protected by only three or four armed guards. And if the robber can distract the cops with an alert to a possible assassination, it is his for the taking. Meanwhile, Lucas Davenport has his own problems. He is being targeted by a psychopathic pimp, who blames Davenport for the fact he's in a wheelchair. Only it's not Davenport he's going after; it's his daughter, Letty. ***READERS LOVE THE PREY SERIES*** 'John Sandford knows all there is to know about detonating the gut-level shocks of a good thriller' The New York Times Book Review 'The best Lucas Davenport story so far.

The man has a fine touch for outlaws' Stephen King on Golden Prey 'Sandford's trademark blend of rough humor and deadly action keeps the pages turning until the smile-inducing wrap-up, which reveals the fates of a number of his quirky, memorable characters' Publishers Weekly on Golden Prey 'It appears there is no limit to John Sandford's ability to keep new breath and blood flowing into his Lucas Davenport series.

This is a series you must be reading if you are not already' Bookreporter.com 'Sandford has always been at the top of any list of great mystery writers.