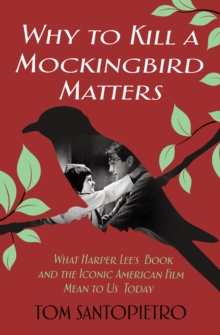 Why To kill a mockingbird matters : what Harper Lee's book and America's iconic film mean to us today

Harper Lee's To Kill a Mockingbird is a classic work of American literature.

When the book was made into a film in 1962 with Gregory Peck as the stalwart southern lawyer, Atticus Finch, the story of Scout, Jim, Dill and Boo Radley entered the American consciousness as well as the American fight for civil rights in a way that few other films have.

Tom Santopietro's new book, Why To Kill a Mockingbird Matters, takes a 360 degree look at the Mockingbird phenomenon.

He traces the writing of the book and the creation of the film from the earliest casting sessions to the choice of director and the three Oscars it won for Best Actor, Best Screenplay Based on an Existing Work, and Best Art Direction.

He looks at the impact of the Pulitzer prize, investigates claims that Lee's book is actually racist, and explores the bombshell that was exploded when Go Set a Watchman, the first version of Mockingbird, was published.

There may be no better time in America to look at the significance of Harper Lee's book, the film, and all that came after.

Tom Santopietro, an author well-known for his writing about American popular culture, shows readers why To Kill a Mockingbird matters today more than it ever did before.