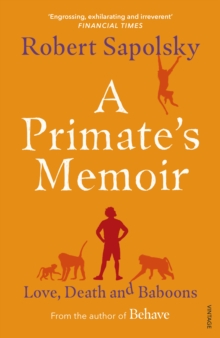 Discover this remarkable account of twenty-one years in remote Kenya with a troop of Savannah baboons from the New York Times bestselling author of Behave. 'One of the best scientist-writers of our time' Oliver SacksBrooklyn-born Robert Sapolsky grew up wishing he could live in the primate diorama in the Museum of Natural History.

At school he wrote fan letters to primatologists and even taught himself Swahili, all with the hope of one day joining his primate brethren in Africa.

But when, at the age of twenty-one, Sapolky's dream finally comes true he discovers that the African bush bears little resemblance to the tranquillity of a museum.

This is the story of the next twenty-one years as Sapolsky slowly infiltrates and befriends a troop of Savannah baboons.

Alone in the middle of the Serengeti with no electricity, running water or telephone, and surviving countless scams, culinary atrocities and a surreal kidnapping, Sapolsky becomes ever more enamoured with his adopted baboon troop - unique and compelling characters in their own right - and he returns to them summer after summer, until tragedy finally prevails. 'A Primate's Memoir is the closest the baboon is likely to come - and it's plenty close enough - to having its own Iliad' New York Times Review of BooksExhilarating, hilarious and poignant, A Primate's Memoir is a uniquely honest window into the coming-of-age of one of our greatest scientific minds.