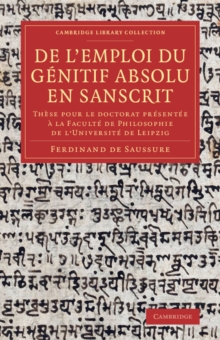 Ferdinand de Saussure (1857-1913), the founder of structuralist linguistics and pioneer of semiotics, began his career as a scholar of Indo-European languages (his early study of the Proto-Indo-European vowel system is also reissued in this series: ISBN 9781108006590).

In 1880, Saussure was awarded a doctorate from the University of Leipzig for this study, which appeared in print in 1881.

He published almost nothing more during his lifetime.

Earlier Indo-Europeanists had noted the almost complete absence of the genitive absolute from Classical Sanskrit texts.

Saussure argued that it must have been a feature of colloquial speech, as it appears in formulaic expressions in less 'purist' Sanskrit texts, as well as in Pali.

He analyses different forms of the construction, and lists nearly 500 examples, many from the Mahabharata and the Ramayana.

The thesis is also of interest as it reveals Saussure's early approach to problems of syntax.