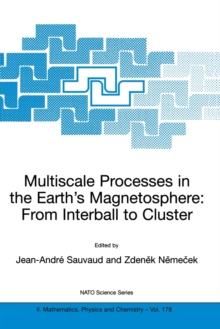 The past forty years of space research have seen a substantial improvement in our understanding of the Earth's magnetosphere and its coupling with the solar wind and interplanetary magnetic ?eld (IMF).

The magnetospheric str- ture has been mapped and major processes determining this structure have been de?ned.

However, the picture obtained is too often static. We know how the magnetosphere forms via the interaction of the solar wind and IMF with the Earth's magnetic ?eld.

We can describe the steady state for various upstream conditions but do not really understand the dynamic processes leading from one state to another.

The main dif?culty is that the magnetosphere is a comp- cated system with many time constants ranging from fractions of a second to days and the system rarely attains a steady state.

Two decades ago, it became clear that further progress would require multi-point measurements.

Since then, two multi-spacecraft missions have been launched - INTERBALL in 1995/96 and CLUSTER II in 2000.

The objectives of these missions d- fered but were complementary: While CLUSTER is adapted to meso-scale processes, INTERBALL observed larger spatial and temporal scales.

However, the number of papers taking advantage of both missions simul- neously is rather small.