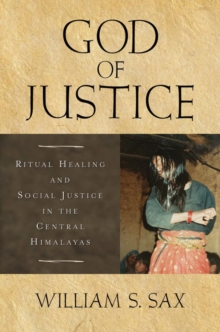 God of justice : ritual healing and social justice in the central Himalayas

God of Justice deals with ritual healing in the Central Himalayas of north India. It focuses on the cult of Bhairav, a local deity who is associated with the lowest castes, the so-called Dalits, who are frequently victims of social injustice.

When powerless people are exploited or abused and have nowhere else to go, they often turn to Bhairav for justice, and he afflicts their oppressors with disease and misfortune.

In order to end their suffering, theymust make amends with their former victims and worship Bhairav with bloody sacrifices. Many acts of perceived injustice occur within the family, so that much of the book focuses on the tension between the high moral value placed on family unity on the one hand, and the inevitable conflicts within it on theother.

Such conflicts can lead to ghost possession, cursing, and other forms of black magic, all of which are vividly described.

This highly readable book includes a personal account of the author's own experiences in the field as well as fascinating descriptions of blood sacrifice, possession, exorcism and cursing.

Sax begins with a straightforward description of his fieldwork and goes on to describe the god Bhairav and his relationship to the weak and powerless.

Subsequent chapters deal withthe lives of local oracles and healers; the main rituals of the cult and the dramatic Himalayan landscape in which they are embedded; the moral, ritual, and therapeutic centrality of the family; the importance of ghosts and exorcism; and practices of cursing and counter-cursing. The final chapterexamines the problematic relationship between ritual healing and modernity.