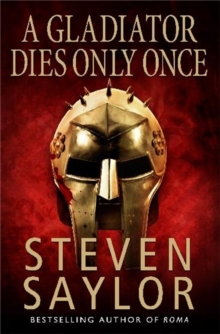 A gladiator dies only once

Fresh from his duel of wits with Cleopatra in "The Judgement of Caesar", Gordianus the Finder, detective of ancient Rome, returns in this new collection of short stories.

Nine tales of mystery, murder and intrigue take Gordianus from the seamy streets of Rome to elegant villas on the Bay of Naples, and from a Sicilian graveyard with a deadly secret to a bloody battlefield in Spain.

Whether against the spectacular backdrop of a chariot race, or settling a domestic dispute with his beautiful Egyptian concubine Bethesda, Gordianus is always on the case.

As in Saylor's previous collection, "The House of the Vestals", all the stories in "A Gladiator Dies Only Once" take place early in Gordianus's career.

Often at his side, rapidly growing up, is the mute boy Eco, his adopted son.

Sertorius, the rebel general who set up a rival Roman state in Spain, casts a shadow across the book from beginning to end, and makes a haunting appearance in the story "The White Fawn."In the title story, a beautiful Nubian actress begs to Gordianus to solve an impossible problem: how can she have just seen her beloved brother in the marketplace, when she previously saw him die a gruesome death as a gladiator?