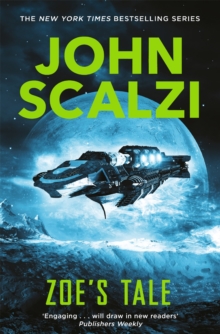 Part of the The Old Man's War series series

She won't go down without a fight. It's not every day you up sticks and move to another world.

But then, Zoe Boutin-Perry's life has never been ordinary.

She's also a holy icon to a race of alien warriors who track her every move.

So she's used to the quirks of being a human in space. However, this time something's different. Betrayed by the authorities, Zoe - along with her parents and fellow colonists - finds herself stranded on a deadly pioneer planet.

The Colonial Union has also set them up as a target for hostile alien action.

Zoe must become a player (and a pawn) in an interstellar battle, which will determine the fate of humanity.

Her father's side of this story was told in The Last Colony, but Zoe's Tale reveals a whole new dimension.

It's a story you may think you know, but you don't really know it at all. Continue the gripping space war series with The Human Division. 'John Scalzi is the most entertaining, accessible writer working in SF today' - Joe Hill, author of The Fireman