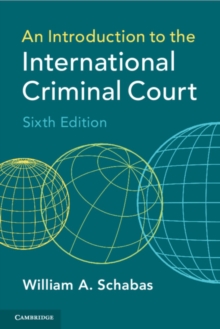 An introduction to the International Criminal Court

This is the authoritative introduction to the International Criminal Court, fully updated in this sixth edition.

The book covers the legal framework of the Court, the cases that it has heard and that are still to come, and the political debates surrounding its operation.

It is written by one of the major authorities on the subject, in language accessible to non-specialists.

The sixth edition brings legal references fully up to date in light of the Court's case law.

Several trials have now been completed, with four convictions and a number of controversial acquittals.

The book also discusses the situations that the Court is currently investigating, including Palestine, Georgia, Ukraine, Venezuela and the UK in Iraq.

It also looks into the crisis with African states and the hostility of the United States to the institution.