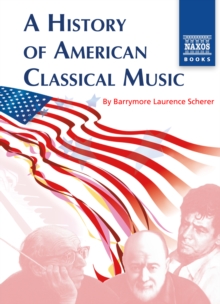 Part of the NAXOS BOOKS series

But this doesn't begin to scrape the surface of a musical heritage reaching back to colonial times.

For instance, did you know that George Washington loved dance music, and that Abraham Lincoln's favorite song was Listen to the Mocking-Bird by the American composer Septimus Winner?

America's legacy of concert music contains extraordinary riches, much of it unfamiliar even to sophisticated music lovers.