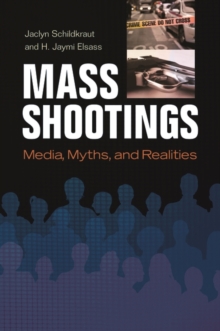 Part of the Crime, media, and popular culture series

This book provides readers and researchers with a critical examination of mass shootings as told by the media, offering research-based, factual answers to oft-asked questions and investigating common myths about these tragic events. When a mass shooting happens, the news media is flooded with headlines and breaking information about the shooters, victims, and acts themselves.

What is notably absent in the news reporting are any concrete details that serve to inform news consumers how prevalent these mass shootings really are (or are not, when considering crime statistics as a whole), what legitimate causes for concern are, and how likely an individual is to be involved in such an incident.

Instead, these events often are used as catalysts for conversations about larger issues such as gun control and mental health care reform.

What critical points are we missing when the media focuses on only what "people want to hear"?

It discusses how the issue is defined, its history, and its prevalence in both the United States and other countries, and provides an exploration of the responses to these events and strategies for the prevention of future violence. The book focuses on the myths purported about these unfortunate events, their victims, and their perpetrators through typical U.S. media coverage as well as evidence-based facts to contradict such narratives.

The book's authors pay primary attention to contemporary shootings in the United States but also discuss early events dating back to the 1700s and those occurring internationally.

The accessible writing enables readers of varying grade levels, including laypersons, to gain a more in-depth-and accurate-understanding of the context of mass shootings in the United States.

As a result, readers will be better able to contribute to meaningful discussions related to mass shooting events and the resulting responses and policies. Tackles common misconceptions about mass shootings perpetrated by and through the media and provides information that grounds the realities of such events in empirical evidenceExplores the history of mass shootings, both before and after the infamous 1999 Columbine High School event and shootings that occurred in and out of schoolsAddresses common myths associated with mass shooting events by the media, such as how often and where they occur and the absence of any warning signsHelps readers understand the realities of these events, including their international reach, the potential warning signs, and how evidence associated with the events can provide clues into why they occurred