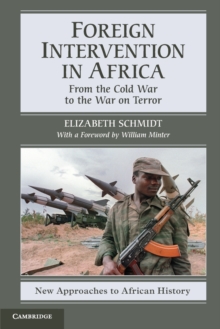 Foreign intervention in Africa : from the Cold War to the War on Terror

Part of the New Approaches to African History series

In the first two periods, the most significant intervention was extra-continental.

The USA, the Soviet Union, China, Cuba and the former colonial powers entangled themselves in countless African conflicts.

During the period of state collapse, the most consequential interventions were intra-continental.

African governments, sometimes assisted by powers outside the continent, supported warlords, dictators and dissident movements in neighbouring countries and fought for control of their neighbours' resources.

The global war on terror, like the Cold War, increased foreign military presence on the African continent and generated external support for repressive governments.

In each of these cases, external interests altered the dynamics of Africa's internal struggles, escalating local conflicts into larger conflagrations, with devastating effects on African peoples.