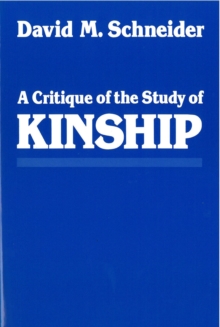 A Critique of the Study of Kinship

Schneider challenges the assumptions on which anthropology has depended for the last century by showing that one of the major categories in terms of which social life has been understood is largely untenable.

The idea of kinship is subject to penetrating scrutiny.

Unlike the proverbial Emperor, it is not that kinship has no clothes.

The question is whether there is anything at all underneath those clothes. And even when the clothes appear to be shreds and patches held together by a web of illusions. The critique uses a novel device in that the same set of ethnographic "facts" are looked at through different theories.

This reveals a good deal about the different theories.

By the same token, of course, this critique goes into the question of what a "fact" of "kinship" might be and how to recognize one either at home or in the field. Schneider's critique also uses history to raise cogent questions about how kinship has been studied.

But it is not as 20/20 hindsight that history is used.

Due respect is paid to the climate of the time, as well as the climatic changes and the ways in which these helped to create the emperor's clothes.

Right, wrong, or indifferent, Schneider's study of how the emperor "kinship" was dressed and then redressed as the winds of change threatened disarray, proves challenging to the theories by which anthropology lives, as well as to the specifically privileged domain of "kinship." The implications of this study for a wide range of problems within theoretical anthropology are striking.