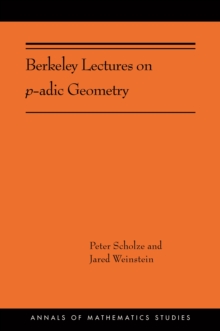 Part of the Annals of Mathematics Studies series

In 2014, leading mathematician Peter Scholze delivered a series of lectures at the University of California, Berkeley, on new ideas in the theory of p-adic geometry.

The introduction of diamonds, along with the development of a mixed-characteristic shtuka, set the stage for a critical advance in the discipline.

In this book, Peter Scholze and Jared Weinstein show that the moduli space of mixed-characteristic shtukas is a diamond, raising the possibility of using the cohomology of such spaces to attack the Langlands conjectures for a reductive group over a p-adic field. This book follows the informal style of the original Berkeley lectures, with one chapter per lecture.

It explores p-adic and perfectoid spaces before laying out the newer theory of shtukas and their moduli spaces.

Points of contact with other threads of the subject, including p-divisible groups, p-adic Hodge theory, and Rapoport-Zink spaces, are thoroughly explained.

Berkeley Lectures on p-adic Geometry will be a useful resource for students and scholars working in arithmetic geometry and number theory.