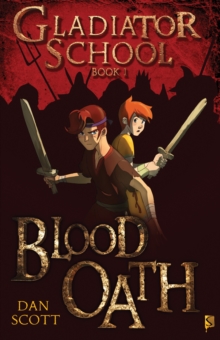 Part of the Gladiator School series

Introducing Gladiator School, a new series of novels set in a world of blood, sweat and sand, heated battles and fierce loyalty and fiercer rivalry.

Young Lucius's privileged life is changed forever when his father, accused of being a traitor, disappears and leaves his family in shame and poverty.

His brother Quintus chooses to train as a gladiator.

Life for Lucius is now among the slaves and criminals who work and train at Rome's gladiator school.

Blood Oath, the first title in the series, leads the reader into an exciting story of family, betrayal, innocence lost and power abused.

Can Lucius decode the strange messages and find his father?

Can he save his family from the grasping hands of his uncle, Ravilla? And can Quintus survive long enough in the arena to fight another day?