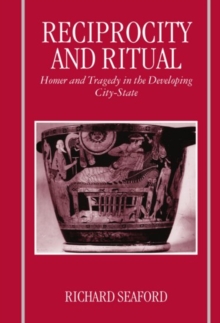 Reciprocity and Ritual : Homer and Tragedy in the Developing City-State

This is an exciting and entirely new synthesis, combining anthropology, political and social history, and the close reading of central Greek texts, to account for two the most significant hallmarks in Homeric epic and Athenian tragedy: the representation of ritual and codes of reciprocity. Both genres are pervaded by these features, yet each treats them in entirely different ways. In this book, Dr Seaford shows that these differences cannot be accounted for in merely literary terms, but require a historical explanation. Homer in its final form is a product of the city state at an earlier historical stage than is tragedy. It is the growth of the city-state and its concomitant developments - in particular of law and of money, as well as in the practice of ritual - that provide akey to the crystallization of the Homeric narrative tradition, to the specificity of tragedy, and to certain features of the thought of the period. In the case of reciprocity, again - whether the positive reciprocity associated with gift-giving or the hostile reciprocity of revenge - the systematicdistinctions between Homer and tragedy can be explained only from a historical perspective.

In its characteristic movement tradegy reflects and confirms the transition from one kind of society towards another: from a network of reciprocial relations, characteristic of societies where the state is weak or absent, to the organization of citizens around a single centre or series of centres, the institutions and cults of the city-state. Challenging, thoroughly lucid, and at times controversial, this lively and original work is the first to attempt to understand the development of early Greek literature from the perspective of state-formation. It should interest all serious students and scholars of both the literature and the history of classical Greece.