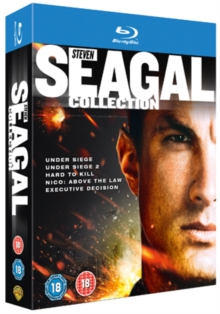 In 'Under Siege' (1992) a battleship is captured by a disgruntled CIA man and his small private army, who pose as a rock band.

The only one who can save the vessel, which has nuclear capability, is Casey Ryback (Seagal), the ship's cook and former Navy SEAL.

In 'Under Siege 2 - Dark Territory' (1995) a passenger train has been hijacked by electronics expert Travis Dane (Eric Bogosian) and turned into an untracable command centre for a weapons satellite.

He plans to blow up Washington DC - for one billion dollars - and it falls to Ryback to stop him.

In 'Hard to Kill' (1990) Los Angeles police officer Mason Storm (Seagal) wakes from a lengthy coma and swears revenge on the crooked cops, vicious hoodlums and the corrupt senator who murdered his wife and child and put him to sleep for seven years.

In 'Nico - Above the Law' (1988) martial arts detective Nico Toscani (Seagal) discovers that a group of drug barons are about to bring chaos to the streets of Chicago.

With the help of his partner (Pam Grier) he soon discovers that the drugs cartel is run by Zagon (Henry Silva), a CIA official whom Nico had worked with during the Vietnam War.

In 'Executive Decision' (1996) Pentagon defence analyst Dr. David Grant (Kurt Russell) has to rescue 400 hostages from a hijacked 747 aircraft which is stacked full of dangerous chemical weapons and heading straight for Washington DC.

Since the terrorists real objective is the destruction of the US capital, Grant realises that attempts at negotiation will be fruitless and consequently resolves to board the 747 himself.

But the mission, led by Special Operations expert Austin Travis (Seagal), looks doomed from the start when the experimental aircraft they are using to board the plane goes wildly out of control during the docking procedure.