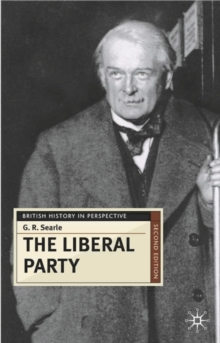 Part of the British History in Perspective series

In the course of the 1920s the Liberal Party disappeared as a serious party of government, though its demise followed hard upon one of its greatest periods of success.

For many years historians have struggled to make sense of this strange story.

Some see the Party's collapse as the consequence of a deep moral or ideological crisis, a loss of belief in Liberalism as a creed the impact of the Great War, in particular, is said to have done irreparable damage to its adherents' self confidence.

Other historians think that the Liberals were replaced by Labour as a direct consequence of the growing importance of class divisions, though there is no clear agreement about when this important transition took place.

This book provides a balanced survey of the literature which has grown up around this topic.

It introduces readers to the major lines of interpretation and suggests ways in which seemingly divergent accounts might be reconciled.

This second edition now includes a new chapter on the Liberal Party and women's suffrage.