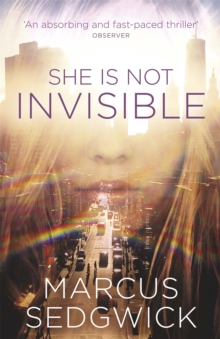 She is not invisible

She is not invisible

A mission made all the more difficult by one fact: Laureth Peak is blind. Laureth's father is a writer. For years he's been trying, and failing, to write a novel about coincidence.

His wife thinks he's obsessed. Laureth thinks he's on the verge of a breakdown. He's supposed to be doing research in Austria, so when his notebook shows up in New York, Laureth knows something is wrong. On impulse, she steals her mother's credit card and heads for the States, taking her strange little brother Benjamin with her.

Reunited with the notebook, they begin to follow clues inside, trying to find their wayward father.

But the challenges and threats that lie ahead are even tougher for Laureth than they would be for any other teenager - because Laureth has no vision to guide her. Also available as an audio book, read from braille by Anna Cannings.