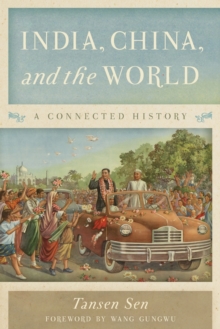 India, China, and the world : a connected history

By: Sen, Tansen,  Gungwu, Wang(Foreword by)

This pathbreaking study provides the first comprehensive examination of India-China interactions in the broader contexts of Asian and world history.

By focusing on material exchanges, transmissions of knowledge and technologies, networks of exchange during the colonial period, and little-known facets of interactions between the Republic of India and the People's Republic of China, Tansen Sen argues convincingly that the analysis of India-China connections must extend beyond the traditional frameworks of nation-states or bilateralism.

Instead, he demonstrates that a wide canvas of space, people, objects, and timeframe is needed to fully comprehend the interactions between India and China in the past and during the contemporary period.

Considering as well the contributions of people and groups from beyond India and China, Sen also explores the interactions between Indians and Chinese outside the Asian continent.

The author's formidable array of sources, pulled from archives and libraries around the world, range from Chinese travel accounts to Indian intelligence reports.

Examining the connected histories of the two regions, Sen fills a striking gap in the study of India and China in a global setting.