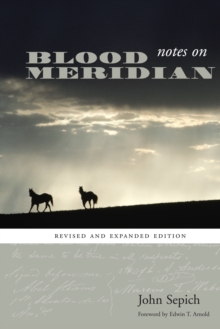 Blood Meridian (1985), Cormac McCarthy's epic tale of an otherwise nameless "kid" who in his teens joins a gang of licensed scalp hunters whose marauding adventures take place across Texas, Chihuahua, Sonora, Arizona, and California during 1849 and 1850, is widely considered to be one of the finest novels of the Old West, as well as McCarthy's greatest work.

The New York Times Book Review ranked it third in a 2006 survey of the "best work of American fiction published in the last twenty-five years," and in 2005 Time chose it as one of the 100 best novels published since 1923.

Yet Blood Meridian's complexity, as well as its sheer bloodiness, makes it difficult for some readers.

To guide all its readers and help them appreciate the novel's wealth of historically verifiable characters, places, and events, John Sepich compiled what has become the classic reference work, Notes on Blood Meridian.

Tracing many of the nineteenth-century primary sources that McCarthy used, Notes uncovers the historical roots of Blood Meridian. Originally published in 1993, Notes remained in print for only a few years and has become highly sought-after in the rare book market, with used copies selling for hundreds of dollars.

In bringing the book back into print to make it more widely available, Sepich has revised and expanded Notes with a new preface and two new essays that explore key themes and issues in the work.

This amplified edition of Notes on Blood Meridian is the essential guide for all who seek a fuller understanding and appreciation of McCarthy's finest work.