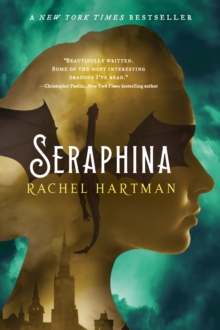 Part of the Seraphina Series series

0375866221 / 9780375866227
Usually dispatched within 4 weeks
Lyrical, imaginative, and wholly original, this New York Times bestseller with 8 starred reviews is not to be missed.  Rachel Hartman’s award-winning debut will have you looking at dragons as you’ve never imagined them before…

Seraphina is a half-dragon, descended from a dragon mother who took human form and a father who has no particular fondness for Seraphina’s kind.

Not that anyone else does either. Hers is a world where dragons and humans live and work side by side—but below the surface, tensions and hostilities are on the rise. Seraphina guards her true self with all of her being, but when a member of the royal family is brutally murdered, she’s suddenly thrust into the spotlight, drawn into the investigation alongside the dangerously perceptive Prince Lucian.

As the two uncover a sinister plot to destroy the wavering peace of the kingdom, Seraphina’s struggle to protect her secret becomes increasingly difficult . . . and its discovery could mean her very life.

"Will appeal to both fans of Christopher Paolini’s Eragon series and Robin McKinley’s The Hero and the Crown."—Entertainment Weekly