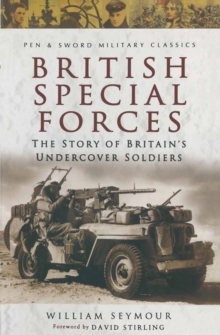 This is the first comprehensive history of all the British Special Forces, from their beginnings during the Second World War to the Falklands War.

The birth of many of the Special Forces was controversial - they were accused of being 'private armies' and a waste of valuable manpower that could have been better used within the regular forces.

Their existence was justified only by their successes.

The secrecy that still surrounds some of the Special Forces makes writing an authoritative history no easy task.

William Seymour's fascinating narrative draws on a wide variety of documentary sources and eye-witness accounts from surviving members of the Forces.

From the chaungs of Burma to the African desert, the Greek islands to the D-Day landing beaches, Special Forces played a vital part in Allied victory in the Second World War.