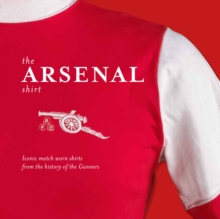 The Arsenal shirt : the history of the iconic Gunners strip through match worn shirts

This beautiful coffee table book presents the visual history of one of the most recognisable shirts in the world of football, the legendary Arsenal shirt.

Displaying shirts from some of the biggest Arsenal match worn shirt collections in private ownership as well as those belonging to former players and staff members', the book brings together the rarest and most iconic Arsenal shirts ever seen and includes: A player shirt example from virtually every one of the home and away shirt variations worn by the Gunners over the last 50 years - from the oldest known surviving Arsenal shirt, to the first red shirt with the famous white sleeves, to Charlie George's yellow 1971 "Double" clincher and Michael Thomas's immortal Anfield 1989 away top.

A player shirt from every major cup final Arsenal have ever played in.

Shirts worn by many of The Arsenal's greatest players including James, Bastin, Mercer, McLintock, Brady, Sansom, Rocastle, Wright, Bergkamp, Vieira and Henry. The Arsenal Shirt is a breathtaking and historic record of the greatest collection of Arsenal match worn shirts that have ever been seen together, and through these classic and iconic shirts the history of one of the world's most famous football clubs comes to life.