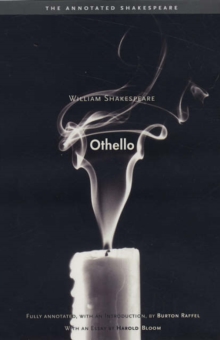 By: Shakespeare, William,  Raffel, Burton(Edited by)

Part of the The Annotated Shakespeare series

The Annotated Shakespeare Series allowsreaders to fully understand and enjoy the rich plays of the world's greatest dramatist"A drama . . . get[s] Yale's red-carpet treatment."-Library JournalOne of the most powerful dramas ever written for the stage, Othello is a story of revenge, illusion, passion, mistrust, jealousy, and murder.

If in Iago Shakespeare created the most compelling villain in Western literature, in Othello and Desdemona he gave us our most tragic and unforgettable lovers.

This extensively annotated version of Othello makes the play completely accessible to readers in the twenty-first century. Eminent linguist and translator Burton Raffel offers generous help with vocabulary, pronunciation, and prosody and provides alternative readings of phrases and lines.

His on-page annotations give readers all the tools they need to comprehend the play and begin to explore its many possible interpretations.

In his introduction, Raffel delves into the interpretive disagreement over Othello's origins and provides an analysis of the characters Desdemona and Iago.

In a concluding essay, Harold Bloom engages our attraction to both power and tragedy in his discussion of Iago, Shakespeare's "radical invention."