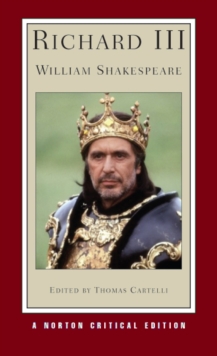 By: Shakespeare, William,  Cartelli, Thomas(Edited by)

This Norton Critical Edition of Richard III is based on the First Quarto (1597) edition of the play with interpolations from the First Folio (1623).

The play is accompanied by a preface, explanatory annotations, A Note on the Text, a list of Textual Variants, and eighteen illustrations of seminal scenes from major dramatic productions and film versions of the play. "Contexts" provides readers with the sources and analogues that informed Shakespeare's composition of Richard III.

These include excerpts from Robert Fabyan's New Chronicles of England and France, Thomas More's The History of King Richard III, Edward Hall's The Union of the Two Noble and Illustre Families of Lancaster and York, A Mirror for Magistrates, and The True Tragedy of Richard III.

A selection from Colley Cibber's eighteenth-century adaptation records the compromised form in which Richard III held the stage for approximately two hundred years before twentieth-century editors brought it back into recognizable shape.

A representative selection of commentary on stage and film reproductions of Richard III is also provided, ranging from reviews of nineteenth-century productions by William Hazlitt and George Bernard Shaw, a survey of stage performances by Scott Colley, and in-depth analyses of twentieth-century film adaptations by Saskia Kossak, Barbara Hodgdon, and Peter S.