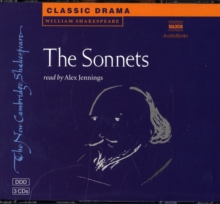 Using the complete, unabridged texts established in the New Cambridge Shakespeare edition, Naxos are making audio versions of Shakespeare's plays and the Sonnets.

Titles, many of are available, both as audio cassettes and as compact discs, sold jointly by Cambridge University Press and Naxos.

Each recording has a full cast of well-known professional actors, accompanied by appropriate music from the Naxos catalogue.

A set of two, three or four cassettes/cds is accompanied by notes and a play synopsis.

The full text of Shakespeare's Sonnets is read by Alex Jennings.