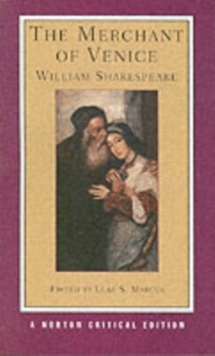 The merchant of Venice

The merchant of Venice

This Norton Critical Edition has been carefully edited to make The Merchant of Venice, its surrounding history, and the history of its critical reception and rewritings accessible to readers.

The text of this edition is based on the 1600 First Quarto, with light editing and substantial explanatory annotations by Leah S.

Marcus. "Sources and Contexts" largely focuses on the character of Shylock and the issue of anti-Semitism in the play.

Materials included are diverse, and at times contradictory, allowing readers to draw their own conclusions.

Examples include seventeenth-century anti-Semitic literature, an essay from the same period defending Jews and arguing for their repatriation in England, an examination of the Christian theology of the play, and readings of The Merchant of Venice as exclusionary for Jews, women, and people of color. "Criticism" collects twenty-one diverse interpretations.

In addition to Shylock and the question of anti-Semitism, these essays address The Merchant of Venice in the context of postcolonial, feminist, and queer theory and explore relevant issues of economic status and organization. "Rewritings and Appropriations" includes excerpts from dramatic, musical, and other literary adaptations of The Merchant of Venice, as well as a selection of poems, most of them from the twentieth century, on the character of Shylock. A Selected Bibliography is also included.