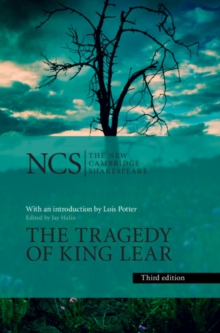 The tragedy of King Lear

For this updated critical edition of King Lear, Lois Potter has written a completely new introduction, taking account of recent productions and reinterpretations of the play, with particular emphasis on its afterlife in global performance and adaptation.

The edition retains the Textual Analysis of the previous editor, Jay L.

Halio, shortened and with a new preface by Brian Gibbons. Professor Halio, accepting that we have two versions of equal authority, the one derived from Shakespeare's rough drafts, the other from a manuscript used in the playhouses during the seventeenth century, chooses the Folio as the text for this edition. He explains the differences between the two versions and alerts the reader to the rival claims of the quarto by means of a sampling of parallel passages in the Introduction and by an appendix which contains annotated passages unique to the quarto.