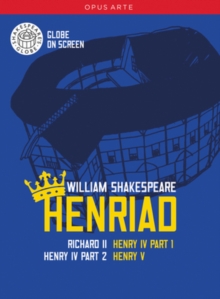 Charles Edwards stars in the eponymous role of this 2015 performance of 'Richard II'.

As the flawed King Richard II hands out arbitrary punishments to his citizens, including his cousin Bolingbroke (David Sturzaker), his poor decisions begin to lose him the support of his fellow noblemen.

The nobles smuggle the exiled Bolingbroke back into the country and with the King distracted by political turmoil in Ireland, Bolingbroke declares himself the new leader and executes the political and psychological demise of his cousin.

The production of 'Henry IV: Part I' was performed in 2010 and stars Oliver Cotton in the title role.

King Henry IV is troubled by the behaviour of his son and heir Prince Hal (Jamie Parker), who has forsaken the Royal Court to waste his time in taverns with the likes of Sir John Falstaff (Roger Allam), an old, jovial drunkard who captivates the young Prince with his zest for life.

When the King is confined to his bed with a serious illness it seems likely that Prince Hal will soon be taking over as leader.

Hal's suitability for the role, however, concerns his father even as his death approaches and Hal takes the decision to spend less time with his friends in preparation for the responsibilities of leadership.

Falstaff, meanwhile, comes out of semi-retirement to raise a small militia.

Now getting on in years, the rascal hopes his friendship with Hal will land him the comfortable retirement he seeks, but will Hal be true to his old allies when he finally puts on the crown?

As the new King attempts to conquer France, he gathers an army of men ready to invade with his sights set on the illustrious crown.