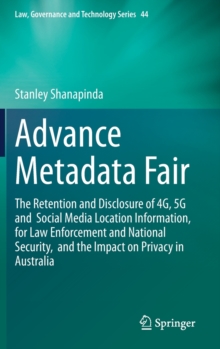 Advance Metadata Fair : The Retention and Disclosure of 4G, 5G and Social Media Location Information, for Law Enforcement and National Security, and the Impact on Privacy in Australia

Part of the Law, Governance and Technology Series series

This book outlines the legal powers of a major Western nation - Australia - to collect and use location information.

Unlike 4G, 5G mobile communications require that cell towers and antennas be in much closer proximity; as a result, the location data can reveal more personal and sensitive information about individual citizens.

Despite this aspect, service providers are required to disclose the data to the authorities, without the need for a judicial warrant.

This book was written from the perspective of big location data software analytics, a capability that makes it possible to combine various location data points to create a profile on a given individual's movements, habits, and political, religious and ideological orientation. In this regard, privacy is poorly protected. The rationale used to justify the powers was enforcing serious crimes - terrorism offences.

Location data can now be retained for at least two years and be collected to investigate even minor offences.

This can be done without the person being reasonably suspected of a criminal offence - when the individual is simply determined to be a person of interest.

This poses legal risks to vulnerable communities. And yet, such investigative techniques are deemed lawful and reasonable.

At a time when national security is so broadly defined to include economic issues, which in turn overlap with climate change and environmental protection, these legal powers should be reassessed.

The book clarifies the complex rules that every citizen must know in order to have agency.

Further, it calls upon authorities to reflect and to self-regulate, by making the conscious decision to surrender some of their powers to review by the independent judiciary.

Without the requirement for a judicial warrant or judicial review, the powers are unfairly broad.

The book pursues an interdisciplinary approach to assess the functionality of mobile telecommunications in direct relation to law enforcement powers and existing judicial precedents.

Further, it offers a unifying techno-legal perspective on a complex issue touching on modern privacy law and communications technologies.